Back to the Future | Munich’s Hierl Architekten and LEICHT bring Paulaner back to its new old home
Back to the Front | LEICHT designs the stage setting for „Onkel Präsident“ [Uncle President]
Back to Black | Relaunch of www.LEICHTonline.com

Who says that you have to be gone in order to come back? LEICHT is back! And three times at that: Our summer newsletter informs you about a successful competition, we take a look at instead of behind the scenes of the Gärtnerplatz Theatre and present you the relaunch of our website. However, we will not yet give away which 21,000 m2 façade we are currently planning in the Swiss city of Biel – but the next newsletter will come for sure. Until then, enjoy reading our summer newsletter!

Germany’s second largest export brewery, the Munich Paulaner brewery, will move. In 2018, the traditional brewery will relocate its production facilities from the Nockherberg hill to the Langwied suburb on the outskirts. But this doesn’t mean that the Nockherberg will turn into a „beer-free“ zone: It will still be home to the annual Starkbierfest (stout festival) and the Paulaner headquarters, which will be located where they used to be a long time ago: in the old Zacherl’sche brewery at the bottom of the Nockherberg.

The listed Zacherl’sche brewery was the predecessor of the Paulaner brewery. This is where the first imperially patented Salvator stout beer was brewed. During the Second World War, the neoclassical building constructed in 1822 was severely damaged; only the vaults and the façade facing the Ohlmüllerstraße and Falkenstraße survived. For the conversion and expansion of the Zacherl building to the Paulaner headquarters, the Bayerische Hausbau GmbH & Co. KG decided to organize a competition in spring 2013 for the realization of the project. The Munich Hierl Architekten BDA DWB ranked first and took the LEICHT experts on board for structural planning.

The winning draft plans to restore the listed ruins, partly reconstruct them with the original features and to integrate them into a modern extension, flooded with light, featuring a façade made of polished white concrete, architectural bronze and printed glass.

Inside the 8,000 square meter rectangular ensemble of tradition and modernity, there will be an interior courtyard covered with ETFE sheets. The icing on the cake for the former and new Paulaner home is the adding of one story with a flat-topped roof.

„I consider this to be an honest solution,“ says Dr. Stefan Schmale, Commercial Director at Paulaner. „It’s back to the roots for us while at the same time we are constructing state-of-the-art headquarters (…). The draft presented by the Hierl Architekten (…) integrates the Zacherl building without denying its past as a ruin“. Christian Ude, Mayor of Munich and member of the jury, expressed his satisfaction: „This draft distinctly reflects the history of the brewery“.

LEICHT congratulates the Munich Hierl Architekten BDA DWB on the project and thanks them for the successful cooperation. 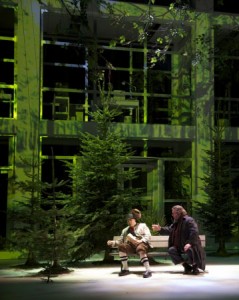 In our newsletters, we usually invite you to take a look behind the scenes of exciting construction projects and to find out what’s behind the façade, in the façade or around the façade. Today, however, we direct your attention to the setting – more precisely: to the setting of the comic opera „Onkel Präsident“ by Friedrich Cerha which just premiered and is the product of a commission of the State Theatre at the Gärtnerplatz in Munich and a following co-production with the Volksoper in Vienna.

Johannes Leiacker from Landshut (Bavaria, Germany)designed the stage setting. He has designed stage settings and costumes for the world’s leading opera houses, amongst others, in Hamburg, London, Madrid, Paris and Tokyo, for the Vienna State Opera, the Moscow Bolshoi Theatre, the Los Angeles Opera and the New York Metropolitan Opera. The two-time „Opernwelt“ stage designer of the year won the Lawrence Olivier Award in the „Best New Opera Production“ category in 2010 for „Tristan and Isolde“ at the Royal Opera House Covent Garden in London.

Not only for this very reason was it an honor and pleasure for LEICHT to provide the structural planning for the 8 meter high, accessible „Onkel Präsident“ stage setting.
Due to the current renovation of the Gärtnerplatz Theatre, the play is currently being performed at the Residence Theatre in Munich.

For more information go to www.gaertnerplatztheater.de/produktionen/onkel-praesident.html

Back to the Black
Relaunch of www.LEICHTonline.com

In mid-June, we relaunched our website www.LEICHTonline.com – with black the chosen predominant color. The photos and pictures of our reference buildings can now show off their outstanding architectural features better than ever before. Or is this due to the eightfold magnification? Decide for yourself.

//structures, for special façades and building envelopes visit //envelopes, click on //expertises for expert appraisals and consultancy projects and on //lab to find out more about research projects and patents.