Allianz Riviera, Nice | After the World Championship is before the European Championship
Multi-purpose hall, Lille | Green on the top, transparent on the sides
FRAC Nord-Pas-de-Calais, Dunkirk | Birds of a feather flock together
Heaven 7, Wolfgang Flatz | LEICHT in 7th heaven

It’s nice if one can finish up one’s projects before the Christmas holidays. That worked out superbly for us this year: among others we completed a soccer stadium, a multi-purpose hall comprising 40,900 ft² and a double gallery. In this winter Newletter 2013, you can find out what these projects were all about and why we recently had to get up on the workshop roof of the polarizing performance artist Wolfgang Flatz. Have fun reading!

We also wish you a relaxing Christmas season and a healthy and prosperous New Year 2014.

2014 can only be a good year: the World Championship in soccer will be held in Brazil, Germany and France will participate and the public television channels will carry all 64 matches.

Yet while the world is anxiously anticipating the opening match on June 12, 2014 between Brazil and Croatia, preparations are already in full swing in France for the next important tournament; after the World Championship is before the European Championship and that tournament will be held in France in 2016 – naturally several fancy new stadiums are needed. 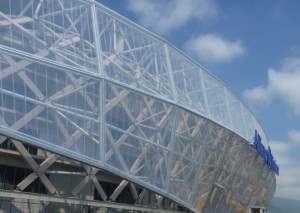 A few weeks ago a particularly attractive specimen was completed and festively opened in Nice on the French Côte d’Azur: the Allianz Riviera Stadium. The arena that accommodates 35,000 spectators is regarded as a showcase project for sustainable stadium construction. Eco-design and creative audacity characterize the plans of architct Jean-Michel Wilmotte who is relying on a type of natural air-conditioning induced by wind as well as an ETFE roof covered by solar cells and a wide-span, netlike and membrane-wrapped supporting structure of wood and metal. The expertise for the planning of the façade and roofing of PVC and ETFE membranes was provided by the building shell experts of LEICHT FRANCE by order of the certification body Bureau Veritas.

A visually stunning video including a time lapse spanning all 761 days of the construction period is available on the Vimeo channel of the builder’s parent company VINCI. Footage of the first appearance of the four-time French champion team OGC Nice in its new home arena is available on the club’s own Youtube channel.

Multi-purpose hall, Lille
Green on the top, transparent on the sides

In the north of France, about 30 mi. southwest of Lille, lies the city of Arras, the administrative seat of the department Pas-de-Calais. Formerly a Celtic settlement and later a Roman garrison town, Arras is nowadays the heart of the urban renewal region Arras Europe consisting of 70 acres. 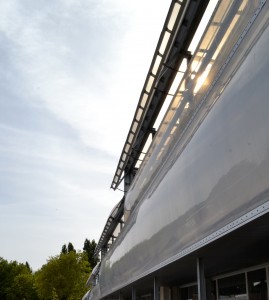 In the past few months a multi-storied multi-purpose hall comprising 40,900 ft² has been built here that is to serve in the future as cultural site and event venue both for the city of Lille and for the local clubs and societies.

Built for the greater part in concrete design, the multi-purpose hall boasts of a notably interesting roofing and façade concept. Whereas the gradually sloping, walkable roof is luxuriously planted and is growing together nearly seamlessly with the adjacent green spaces, the transparent membrane polycarbonate façade stands out clearly and self-assuredly in contrast to the green of its environment and emphasizes the open, communicative character of the building. 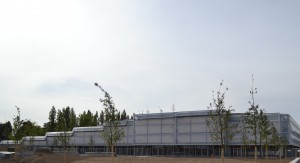 Both LEICHT and LEICHT FRANCE participated in the planning of the multi-purpose hall. Thus, LEICHT was responsible for the entire support structure design and LEICHT FRANCE provided the detailed design for the installation of the ETFE film cushions on the façade and roofing.

FRAC Nord-Pas-de-Calais, Dunkirk
Birds of a feather flock together

Two years ago we reported on the commissioning of LEICHT FRANCE to renovate a dry storage hall for boats located in the former shipyard in the port of Dunkirk so that it would serve as the new home of the regional cultural institution FRAC Nord-Pas-de-Calais. This project has now been completed successfully. 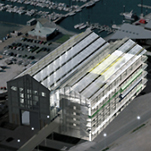 In order to render the hall usable for concerts and exhibitions and to offer the regional FRAC (Regional Fund for Contemporary Art) a new habitat including gallery, workshop and meeting place for contemporary art, the Parisian architects Lacaton & Vassal came up with something special. They designed a look-alike to the huge, light-flooded hall and situated it on the side of the original so that both buildings can serve either as individual locations or as complementary expansions of one another. 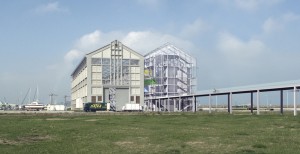 For the look-alike building they designed a transparent, bioclimatic building shell, for the ETFE cushions of which LEICHT FRANCE took over the permit planning. Moreover, LEICHT FRANCE was responsible for the detailed design and the workshop planning for the membrane construction, for the planning of the air supply system and for the surveillance of the ATEX approval procedure.

At times the Austrian performance artist Wolfgang Flatz who lives in Munich induces static load severely: on the one hand, this applies to his body’s own statics – for example, when he allows himself to be hung headfirst from a rope as a human bell clapper to bang back and forth between metal plates to accompanying waltz music. 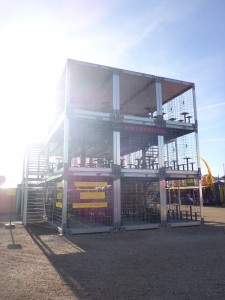 On the other hand, it applies to the statics of his workshop in Kistlerhofstrasse. Because the objects that Wolfgang Flatz has collected and arranged on the roof of his sculpture garden Heaven 7 not only have artistic weight: among other things, one finds here a military helicopter transformed into a wind power station, a fluorescent Statue of Liberty, a gold plated mobile home and a chairlift gondola converted to an observatory.

So that Heaven 7 can continue to flourish without the ceiling someday falling on Flatz’s head in his workshop, LEICHT took over the static supervision of the sculpture garden and is looking forward to also supporting Wolfgang Flatz in other performances. For example, in the construction of his human cage of 18 wire metal boxes, his „Café Bad Connection“, that – with and without naked occupants – can be visited and/or moved into up to the end of the year at the Munich Tollwood festival.